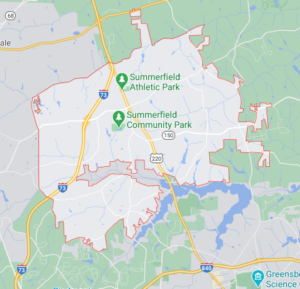 Are you thinking of buying or building a home in Summerfield, North Carolina? A suburb of Greensboro, Summerfield is quickly becoming a well-developed area while still maintaining a small town feel.

Summerfield homebuilders, such as Don Mills Builders are constructing custom homes in the most highly desired neighborhoods in the area. If you’re interested in a truly unique custom home in a great location, check out what this town has to offer.

The Foundation of Summerfield

Dating back to 1769, Summerfield began as a 640 acre plot of land purchased by Charles Bruce. This original homestead grew and the community expanded around this location that is now the heart of the historic district of Summerfield.

The area mostly consisted of individually owned farms and homesteads, with corn, tobacco, and cattle being the biggest products. The crops from these farms supplied the cities of Greensboro and Winston Salem throughout the 1800s.

Summerfield’s Part in the American Revolution

Charles Bruce’s home was the meeting location of a group of patriots known as the “Friends of Liberty” that supported the revolution. Bruce fought against the local Tories and British troops, acting as a recruiting officer to bring in as many people as possible to fight for the cause.

The story of the Bugler Boy is an important part of Summerfield’s Revolutionary War history. James Gillies played the bugle for “Light Horse” Harry Lee, an American General, but was killed in a skirmish by  Banastre Tarleton’s dragoons. and is buried in the Bruce family cemetery. The grave is located across the street from Summerfield Elementary and is the namesake for the school newspaper, The Bugler.

How Summerfield Got its Name

You may wonder why Summerfield is not named after its founder, Charles Bruce. In fact it was called Bruce’s Crossroads until 1812 when a traveling preacher named John Summerfield came to town and held a revival. He decided to settle down in the area and the townspeople decided to rename the town on his behalf.

The Evolution of Summerfield

In the 1870s Summerfield began to evolve into a business hub as stores were built at the crossroads of highway 150 and highway 220. The railroad also came through the area about this time, increasing the amount of travel and commerce in Summerfield. The tracks have since been removed, but you can still see the evidence of the railroad from the Toscana and Lake Brandt greenways.

In 1996 Summerfield was officially incorporated as a town and it continues to grow and develop through the various housing communities and new businesses that are going up in the area.

Become a Part of Summerfield’s Future with Don Mills Builders

If you think Summerfield sounds like the right place to build a home, Don Mills Builders can offer you a wide range of ready-to-build homesites in the many up and coming neighborhoods. As one of the premier Summerfield homebuilders, Don Mills can create the home of your dreams in a convenient location with small town charm.